Maltese upcoming Gymnast Tara Vella Clark has been named the December 2020 winner of the Atlas Youth Athlete of the month award. This award was launched in January 2020 as a joint initiative between the Malta Sports Journalists Association and Atlas Insurance.

Tara Vella Clark distinguished herself in the month of December after placing eighth in the Beam final at the European Artistic Gymnastics Championship in Mersin, Turkey; an incredible feat for Maltese Gymnastics as she became the first Maltese athlete to ever manage to qualify to a final in a continental championship.

During her qualifying routine, Vella Clark produced a sterling performance on the beam when she managed to secure an impressive score of 12.200 which placed her fourth in the provisional standings and secured for her a place in the final.

Eventually, Vella Clark attained a score of 9.350 points that left her eighth in the final standings, which was still Malta’s best result ever at the European Championships.

Romania’s Ana Barbosu took the gold medal with a score of 13.100 ahead of Greta Mayer, of Hungary, and Romania’s Andreea Preda.

This positive result follows those registered earlier in 2020 where she competed successfully also in the floor exercise final at the Stella Zakharova Cup in Ukraine and in the vault and balance beam finals at the Mediterranean Championships in Italy. She had earlier won the Category II all-around title and two apparatus finals at the Laza Krstic and Marica Dzelatovic Memorial in Serbia, and placed fourth all-around at the Old Trnava Cup in Slovakia.

The build up to the European Championships had commenced with an impressive fourth place all-around, and a first place on vault and on balance beam at the Tiger Cup in Latvia in March.

This was the 12th award being awarded to a local youth athlete in this successful and sought for award that recognizes the efforts by young Maltese athletes.

Meanwhile, the Malta Sports Journalists Association and Atlas Insurance will issue an official communication in the coming days explaining the method how the overall Atlas Youth Athlete of the Year 2020 will be awarded including a call to the general public to vote for their preferred athlete.

The trophy for the December 2020 Atlas Youth Athlete of the month and the sports apparel voucher combined with this award were presented to Tara Vella Clark by Matthew von Brockdorff, Managing Director and Chief Executive Officer at Atlas Insurance. Sandro Micallef and Lorraine Cunningham, President and General Secretary respectively of the Malta Sports Journalists Association were also in attendance. 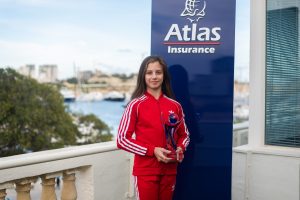