Malta National Team and US Sassuolo Calcio Femminile player Haley Bugeja has been named as the winner of the October 2020 Atlas Youth Athlete of the month award. During the month of October Bugeja distinguished herself with her Club US Sassuolo in the Italian Serie A Femminile where she secured the starting lineup jersey in all of US Sassuolo’s games played in October. Additionally she managed to score again in the League’s Match Day 6 against Florentia San Gimignano in a 3-1 win for US Sassuolo.

Bugeja had made a huge impact in the Italian Serie A Femminile when on her debut on 5th September 2020 as she has netted a brace in Match Day 3 in a 3-1 home win against Napoli Femminile. After the win against Napoli she was again on the score line in a similar 3-1 win away to Fiorentina.

Bugeja who tuned 16 earlier this year, managed to establish herself as one of the best ‘foreign players’ in the Italian’s women top flight football league.

Last week she added her tally by netting another goal against Hellas Verona in a 4-1 victory at the Stadio Comunale Enzo Ricci in Sassuolo to make them 5 goals so far this season.

Bugeja will be called up again by National Football team coach Mark Gatt to feature in the UEFA Women’s EURO Qualifiers away double header against Georgia and Israel on 26th November and 1st December respectively.

This was the tenth award being awarded to a local youth athlete in the series of this joint initiative by Atlas Insurance and the Malta Sports Journalists Association to recognize the efforts by young sports athletes and thus encouraging them to continue to train harder in their respective sports disciplines.

The trophy for the October 2020 Atlas Youth Athlete of the month and the sports apparel voucher combined with this award will be handed to Bugeja later on this month when she will fly in to Malta just one day before she travels as a group with the Women’s Malta National team to Georgia. 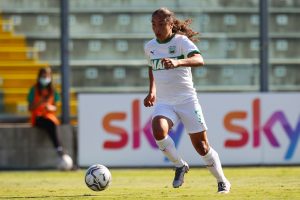