Eight Ball Pool player Dejan Grech has been declared as the the Atlas Youth Athlete of the month following his achievement in the European Eight Ball Pool Championship 2020 held in Malta last month.

This is the second award being awarded to a local youth athlete following the launch of this initiative by Atlas Insurance in collaboration with the Malta Sports Journalists Association.

Dejan Grech was the most successful Maltese player in the 2020 European Eight Ball Poll Championship where he was crowned European Champion in the Under 23 category. In the final he managed to beat Irish player Thomas Morgan 7 frames to 3.

Grech’s experience in this international event will be one to be remembered also for the fact that along with the Malta Under 23 team he managed to reach the final against Team Ireland with the Irish counterparts this time claiming the honor.

Dejan Grech’s superb form in this Tournament led him to reach also the semifinal in the Men’s Open category.

The trophy for the February Atlas Youth Athlete of the month award together with the sports apparel voucher were presented to Dejan Grech by David Cassar Manager Business Development Atlas Insurance. Officials from the Malta Sports Journalists Association were also in attendance. 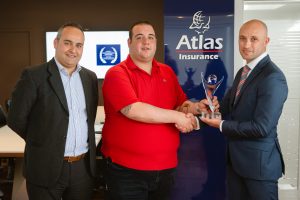