The Games of the Small States of Europe (GSSE) Media Working Group, which was founded in January 2019 in Lausanne during the General Assembly of AIPS, held its second meeting in the occasion of the 2020 AIPS Congress in Budapest, Hungary. One of the main aims of this group is to facilitate and provide modern and adequate conditions for journalists during the bi-annual GSSE, a multi-sport event in which nine European countries of a population under one million participate on a regular basis.

During the meeting held in Budapest Malta Sports Journalists President Sandro Micallef was appointed as Chairman of this group with his counterparts in Cyprus, Erodotos Miltiadous and in San Marino Elia Gorini assisting with the coordination of this group.

The latest edition of the GSSE took place in 2019 in Montenegro. It was the first time the Balkan country hosted the Games, after joining the GSSE family in 2009 and participating for the first time in 2011. The other eight countries, Andorra, Cyprus, Iceland, Liechtenstein, Luxembourg, Malta, Monaco and San Marino, have participated in all the Games since 1985. The 2021 GSSE will take place in Andorra, with the Pyrenees nation hosting for the third time, as the rotational hosting duties requires.

For the small countries’ journalists, the GSSE are particularly important since a large number of journalists from those countries are accredited and cover the Games.

The members of the Working Group completed the de-briefing of the 2019 GSSE, stating that Montenegro did an excellent job at hosting, and at the same time noted measures of improvement for the Media, such as the need for dedicated internet, more organized media facilities and better organization of the Main Press Center.

The members of the GSSE Media Working Group discussed proposals ahead of “Andorra 2021”, which will be communicated to the respective NOC’s and the organizing committee. Among the proposals, are better internet access and facilities in the press working areas, access to cheaper accommodation and car rental options along with optimum positioning of the MPC and the press facilities.

At the end of the meeting in Budapest Sandro Micallef expressed his appreciation for the trust shown in him by the other GSSE countries to lead this group. “My appointment comes just over a year from the next edition of the 2021 GSSE to be held in Andorra and it will be one of my immediate tasks to help our sports media colleagues in this country to set with no further delay their sports journalists association so that they can be with us at similar AIPS congresses around the table when we come to make official proposals to our respective NOC’s and the hosting nations of the games” said Micallef.

The GSSE Media Working Group is planning to travel to Andorra to visit the competition venues and to hold an official meeting with the organising committee of the GSSE Andorra 2021. 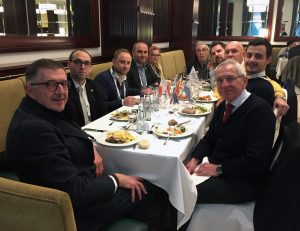 The second meeting of the GSSE Media Working Group held in Budapest during the AIPS Congress.