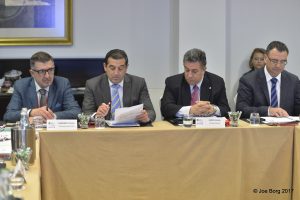 Malta, 22 February . The final meeting of the Executive Committee of AIPS Europe was held in Malta on the 21st.February. The Malta2017 meetings brought to an end the term of office of the Executive committee which was elected in 2014 during the AIPS Congress in Baku.

AIPS Europe together with the Malta Sports Journalists’ Association opened the two days of meetings with the International Media Seminar which dealt with current topics related to the international media. Nastassia Marynina gave details on the 2nd. European Games to be held in Minsk in 2019 while Predrag Milinkovic went through his ten years’ experience of reporting and filming the Dakar Rally. The main issue was the debate about the Media Rights and restrictions as dealt with by AIPS Europe President Ioannis Daras.

The AIPS Europe Executive Committee Meeting was officially opened by the Hon.Chris Agius, Parliamentary Secretary for Sport . Present also the Opposition spokesman for sport the Hon.David Agius as well as Mr.Mark Cutajar, CEO for Sport Malta who together with the MSJA organized the Seminar.

The main item was the confirmation for the candidates for the AIPS Europe elections for the term of office 2017 – 2021 . After two terms of presidency of AIPS Europe  – Ioannis Daras opted not to contest for the 2017 – 2021 elections but however will be contesting for the post of Vice President at the AIPS Elections.

Those nominated for the 2017 – 2021 AIPS Europe elections are the following :

Agca Murat (Turkiye) for the post of Treasurer and EC Member,