Nicholas Muscat has been awarded the Atlas Youth Athlete of the Month Award for the month of November 2022.

Young bowler Nicholas Muscat, aged 17, won the U23 National Championships and his second personal U23 title. He also helped his team OKMalta.com to win the national league Division 1, for the seventh consecutive time.

In September, Muscat made history as he became the first Maltese to ever make the final of the European Youth Championships (EYC) Masters event after winning two bronze medals individually (All Events) and alongside his national team-mates (Team Event). He earned a silver medal in the Boys’ Masters Event – arguably the most prestigious championship with the top 24 bowlers from the entire EYC.

The trophy for the November 2022 Atlas Youth Athlete of the Month, together with the sports apparel voucher, were presented to Nicholas Muscat by Robert Micallef, Chief Commercial Officer of Atlas Insurance. The Malta Sports Journalists Association was represented by President Sandro Micallef and Administrator Stephen Azzopardi. 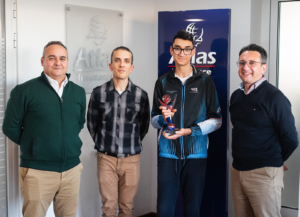