The Malta Fair Play Movement’ has announced the seventh TGS Malta Fair Play Award, in collaboration with Malta Sports Journalists Association and Together Gaming Solutions. The adjudicating panel is formed by Charles Camenzuli, Adele Muscat, Pierre Cassar, Kevin Joseph Azzopardi and Sandro Micallef. This award is aimed at sporting individuals or teams who would have distinguished themselves with an altruistic gesture of fair play during official and/or non-official competitions.

The third award for this year 2022, covering the July–September period, was given to Jake Castaldi. The 12-year-old blackball pool player admitted to committing a foul while on the table without the referee or anyone else present noticing it. His admission resulted in losing the decisive frame and his team Ħamrun 147 C lost the Regional Knockout Final held on 28/9/22 to Birkirkara Dukes A. Castaldi won the respect of all those present for his act of fair play.

‘Honesty is an imperative value across all competitive sports and it is laudable to see Jake at such a young age sending out that message loud and clear. We are proud to support this initiative in rewarding Jake for such a commendable gesture.’ said Benjamin Delsinger Managing Director of Together Gaming Solutions.

The presentation of the TGS Malta Fair Play Award was hosted by Andrea Critien from the Finance & HR Department and Edward Licari, Director of Together Gaming Solutions, at their offices in St. Julian’s. Charles Camenzuli was present on behalf of the Malta Fair Play Movement. 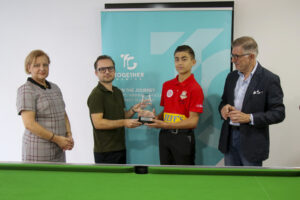