Matti Satariano has been awarded the Atlas Youth Athlete of the Month Award for the month of November.

The 14-year-old Sliema Inter Darts Club player managed to score 3 180s, which means he marked the highest score possible by landing the darts on a triple 20 three times. He obtained this successful score during a national championship match organised by the Malta Darts Association. In fact, Sliema Inter DC played Floriana Ajax, and he played John Ciantar, winning his game 3 -2 with 3 180s. In the end, as a team, after all the teams’ players played their respective games, Sliema DC lost 6-2.

The trophy for the November 2021 Atlas Youth Athlete of the Month together with the sports apparel voucher were presented to Matti Satariano by Robert Micallef, Chief Commercial Officer of Atlas Insurance. The Malta Sports Journalists Association was represented by President Sandro Micallef, Administrator Stephen Azzopardi and member Domenic Aquilina for this presentation. 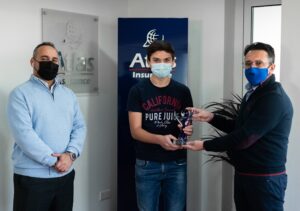