Qormi Daikin got hold of the first title of the season after beating GREE Sliema Hotsticks 4-2, in the final played at the Hockey Complex in Corradino.

This win for Qormi came after a dramatic defeat of 3-2 against the same Sliema Hotsticks in last week’s Knock Out Final.

The team led by coach Andre Ghio was more focused and obtained a good advantage in the first two quarters, which helped them win this final.

The Super Cup Final was, therefore, the start of a new season after the 2020/21 officially closed last week.

Qormi scored twice in the first quarter through Matthijs Bartelts and Steve Tanti. In the second quarter, Bartelts’ second goal added another one, and Matteo Forani scored the fourth one. Chris Agius scored twice for Sliema, but this was not enough to put them back on track. 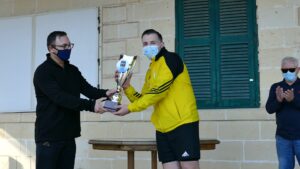