Sirens ASC 15-year-old swimmer Sash Gatt has claimed the Atlas Youth Athlete of the Month Award for the month of June 2021. Gatt was chosen as the winner of the June award following her outstanding results, thus breaking her own personal, national and age group records.

In the 400m freestyle, she stopped the clock in 4:18.58, over five seconds faster than the 4:23.33 mark she established in February. The very next day, Gatt broke her own national record in the 800m freestyle with a time of 8:52.22. She had previously set that record in March at 8:58.88, as the opening split of what was also a national record-breaking time in the 1500m. Both of those national records are also the Maltese age group records. 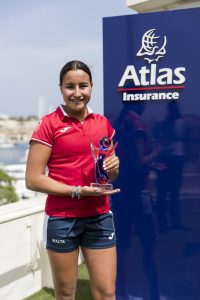