The Malta U15 National Water Polo Team has been awarded the Atlas Youth Athlete of the month Award for May. For the first time ever, this award was given to all team players instead to an individual athlete.

The Malta U-15 national team brought further success for Maltese water polo after keeping France at bay to top Group C in the qualification for the LEN Men’s European U-15 Water polo Championships 2021. Even though the boys had an obvious lack of match practice, they won 17-4 against Slovenia and then shared a 10-10 draw with France.

The Men’s European U15 Water Polo Championships will be held between the 4th and 11th July 2021 in Loulé, Portugal.

The trophy for the May 2021 Atlas Youth Athlete of the Month together with a memento for all players were presented to the 14 U-15 national team players by Matthew von Brockdorff, Managing Director and Chief Executive Officer of Atlas Insurance. The MSJA was represented by General Secretary Lorraine Cunningham and Administrator Stephen Azzopardi for this presentation.

This award is a joint initiative of the Malta Sports Journalists Association and Atlas Insurance. The adjudicating panel of this award takes note of all the youths’ achievements of the month under review and at the same time it invites local sport associations and federations to send in their nominations for consideration if they feel that any of their under-21 athletes have distinguished themselves during that particular month. 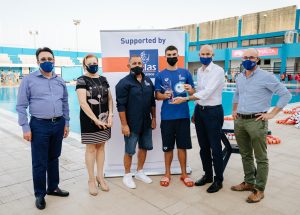