Francesca Curmi is February’s Atlas Youth Athlete of the Month

Francesca Curmi is February’s Atlas Youth Athlete of the Month

Eighteen-year old Francesca Curmi has been declared the winner of the Atlas Youth Athlete of the Month for the month of February. This was mainly due to her stellar performance during the ITF Tournament held in Monastir, Tunisia, when against all odds and facing better seeded opponents, she achieved six straight victories to reach the final played on Sunday 28th February. Francesca became the first ever Maltese tennis player to reach a Final of a ‘Futures’ event. Unfortunately she was beaten by her Polish opponent in the final.

Francesca has been playing tennis since she was seven and since then she participated in international tennis tournaments across the globe making quite a name for herself on the world junior circuit having taken part in all the junior grand slams – Roland Garros, Wimbledon, US Open and Australian Open.

With more international matches on her calendar this year, Francesca Curmi will not be returning to Malta for some weeks. Therefore the official presentation of the Atlas Youth of the Month trophy and the sports apparel voucher that goes along with this award will be held at a later date.

This is the second year that Atlas Insurance is collaborating with the Malta Sports Journalists Association to reward young athletes who distinguish themselves and are Malta’s up and coming future stars. In fact this award has now established itself within the sporting community and whilst the adjudicating panel takes note of all the youths achievements, local sport associations and federations are welcome to send in their nominations for consideration if they feel that any of their under-21 athletes have distinguished themselves during that particular month. Nominations for this award may be sent on email info@maltasportsjournalists.com.

The rules and regulations of this monthly award can be viewed on the website www.maltasportsjournalists.com

The first award for 2021 was won by Tenpin bowler Kayden Lagana who claimed the January accolade. 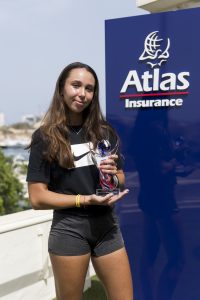