Young Tenpin bowler Kayden Laganà has been chosen as the Atlas Youth Athlete of the Month for January. Laganà’s results in the month in review led the panel of three local sports journalists to name him as the first winner of this prestigious award for 2021.

Kayden Laganà won the right to represent the Malta Tenpin Bowling Association at the upcoming Mediterranean Championships, in Paris, France, after topping the men’s category in the MTBA qualifying tournament.

Still to turn 14, Laganà was entitled to compete in the Open men’s category which ended up in a three way contest between Laganà, 19 year old Matthew Magro (winner of the Atlas Youth Athlete of the month in June 2020 ) and 16-year-old Nicholas Muscat.

After ending day one of the Tournament in third place, Laganà paved his way from third to second on day two and eventually taking the first place in the leader board with a set of eight games, including a personal best of 277, as well as a great 253.

The final result of the qualifying Tournament meant that the Malta Tenpin Bowling Association will be represented in the Mediterranean Championships, by the youngest ever Athlete in the history of these Championships.

Lagana’s triumph will automatically put him also through the final selection for the Malta team for the European Team Championships to be held later this year.

This was the first Atlas Youth Athlete of the month Award of 2021 after the Malta Sports Journalists Association and Atlas Insurance renewed their collaboration of this joint initiative aimed at empowering Youth Maltese athletes and recognizing their efforts.

The trophy for the January 2021 Atlas Youth Athlete of the month award and the sports apparel voucher combined with this award were presented to Kayden Laganà by David Cassar Business Development Manager at Atlas Insurance.

The general public, athletes, together with local Sports Associations and Federations willing to nominate individuals to be considered for this award are requested to send in their nomination on info@maltasportsjournalists.com along with a short motivation and details of results achieved by the individual. The rules and regulations of this monthly award can be viewed on the website www.maltasportsjournalists.com. 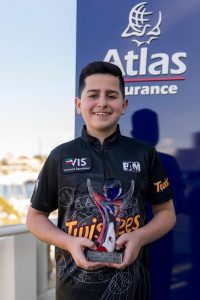