Young Sailor Richard Schultheis was named as the ‘Atlas Youth Athlete of the month’ for the month of July 2020. Schultheis was chosen as the winner of the July award after his recent success in one of the most prestigious international regattas organised by the Italian Sailing Federation. Schultheis managed to win this competition which was the first one since such sailing competitions resumed after the COVID-19 pandemic of the February – May period.

Richard Schultheis who hails from a family of sailors and experienced skippers won the 29er category of this Regatta which was held in the Circolo Vela Arco.

Following 10 days of practice in a variety of wind conditions, Schulthies 15, showed great skills to dominate the actual competition. The Maltese young sailor who was competing along with Max Koerner won with a 22 point difference from runners up Marco Corrado and Matteo Catalano who were representing the Italian Club Centro Vela Bari.

This was a special success for the Schultheis family and the Malta Young Sailors Club since Richard’s sister, Antonia Schultheis also managed to secure podium finish with a final third overall place in the same 29er category along with Ole Ulrich.

This was the seventh award being awarded to a local youth athlete in the series of this joint initiative by Atlas Insurance and the Malta Sports Journalists Association to recognize the efforts by young sports athletes and thus encouraging them to continue to train harder in their respective sports disciplines.

The trophy for the July 2020 Atlas Youth Athlete of the month together with the sports apparel voucher combined with this award could not be presented physically this time to Richard Schultheis since after competing in Italy he travelled together with his family straight to Germany for another two back to back similar international Regattas. 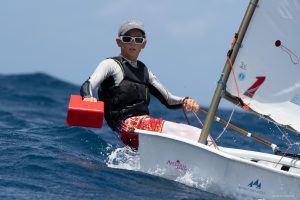