Tenpin bowler Matthew Magro was named the ‘Atlas Youth Athlete of the month’ for the month of June 2020. Magro won this award following his recent impressive results which saw him officially becoming the youngest ever Maltese tenpin bowler to roll a perfect game.

Magro started to play tenpin bowling when he was eight years old and has since then continued to train to improve his technique to become one of the most promising youth players within the Malta Tenpin Bowling Association. After three long months away from the bowling lanes, Magro came back with a huge bang in June after his 3 game series at the MTBA Cisk Doubles League tailed to a 756 series including a 300 perfect game in the first week of the competition.

During this League Magro was paired with local veteran legend Sue Abela. At 18 years and 8 months Magro was confirmed as the youngest ever local Tenpin bowler to register such a result and additionally smashing his personal best by 3 points.

Following this record, later on during the month of June Magro was in high spirits as he headed into MTBA Memorial which was a 6 game series competition. He led all the way and was the only player to bowl a series over 1300 during the six games beating 15 year old Nicholas Muscat who is the current Under 16 and U23 male National Champion by 9 pins.

This was the sixth award being awarded to a local youth athlete in the series of this joint initiative by Atlas Insurance and the Malta Sports Journalists Association to recognize the efforts by young sports athletes and thus encouraging them to continue to train hard in their respective sports disciplines.

The trophy for the June 2020 Atlas Youth Athlete of the month together with the sports apparel voucher combined with this award was presented to Matthew Magro by David Cassar Manager Business Development and Marketing Atlas Insurance. 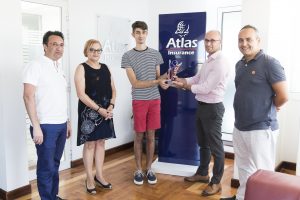