Local inspiring young athlete Jake Vella has been awarded the Atlas Youth Athlete of the Month for April 2020.

Jake Vella has been extremely busy with daily physical exercises in his residence under the supervision of his coaches Fabio Spiteri, Marthese Fava and Gail Rizzo. Due to his vulnerability, Vella was urged to follow the Health Authorities and his doctor’s recommendations to stay at home during this period in which he had to adapt to training from his makeshift ‘training room’.

Vella is experiencing an ongoing battle against a rare condition and with his perseverance and hard training he is committed to reach his goals. Vella has been diagnosed with the ‘ROHHAD condition’ which is a life-threatening syndrome that affects the autonomic nervous system.

During the past month Jake was an inspiration to fellow youth athletes as he proudly shared his daily physical exercises on his treadmill and rowing machine on his Facebook page. In the coming days Vella is planning to focus more on swimming.

This is the fourth award being awarded to a local youth athlete since the launch of this Award which is a joint initiative by Atlas Insurance and the Malta Sports Journalists Association. The previous winners before the April award claimed by Jake Vella were: Sprinter Rachela Pace who was awarded the January 2020 trophy, Pool player Dejan Grech who scooped the February 2020 award and Weightlifter Tenishia Thornton who claimed last award.

Despite the ongoing COVID-19 pandemic, the Executive Committee of the Malta Sports Journalists Association and Atlas Insurance agreed that the Youth Athlete of the Month Award will continue to be awarded.

Being aware that the award for the time being cannot be given on the basis of purely sporting achievements the Malta Sports Journalists Association will be short listing for this award young athletes who are distinguishing themselves with hard training from home or individuals who are giving a positive contribution to the communities they live in and to Maltese society in general, through the promotion of sports via online activities aimed at promoting well-being, as well as good deeds and voluntary work aimed at helping other athletes as well as people in need.

The Malta Sports Journalists Association is encouraging athletes under the age of 21, as well as their respective associations and federations who would like to submit their nomination to do so by sending an email on info@maltasportsjournalists.com

The trophy for the April 2020 Atlas Youth Athlete of the month together with the sports apparel voucher combined with this award was presented to Jake Vella by Robert Micallef Chief Commercial Officer of Atlas Insurance. Lorraine Cunningham, General Secretary of the Malta Sports Journalists Association and one Fabio Spiteri one of Jake’s coaches were also in attendance. 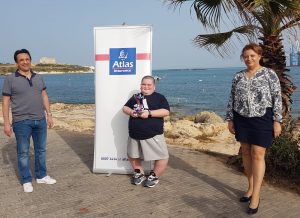