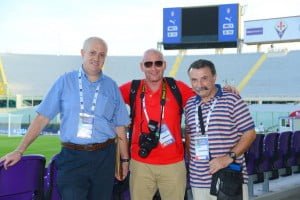 A group of 18 Sports journalists members of the MSJA – Malta Sports Journalists Association has traveled together in an organised trip to Florence to follow the European Qualifiers match Italy v Malta which was played in the Artemio Franchi Stadium on 3rd September 2015.

This was the very first time that a record number of Maltese Sports media traveled together to follow an away match of the Malta National Football Team.

The Malta National Football team is usually followed on a regular basis for away trips by local Newspaper The Times and local National TV broadcaster Television Malta. In the 1990’s local based cigarette company Central Cigarettes used to sponsor and subsidize such trips for Maltese sports journalists.

The MSJA has wholeheartedly thanked its member Peter Paul Gauci for accepting to be the Tour Leader of this trip which resulted to be very successful. The Association also thanked all sports journalists and photographers who opted to join the tour.