The Malta Sports Journalists Association’s Annual General Meeting (AGM) was recently held at one of the esteemed hotels in St. Julian’s.

General Secretary Lorraine Cunningham presented the administrative report which was approved unanimously together with the financial report presented by Stephen Azzopardi.

During this AGM those present were briefed about the various duties and activities organised by the Malta Sports Journalists Association since last year’s AGM.

This year was another struggling one due to the pandemic situation but eventually we returned to normality, once again reporting live sports events.

During this year Malta was honoured to host the Special Olympics Invitational Games, FIBA Championship for Small European States and other preparatory events ahead of GSSE Malta 2023.

The MSJA’s Executive Commitee met 6 times with the first three meetings which were on a virtual platform and the last three were hybrid as not all the members were able to attend at the MSJA’s office.

It was another successful year for the collaboration with Atlas Insurance for the Atlas Youth Athlete of the Month and of the Year. Thanks to this award local young athletes are eagerly awaiting this monthly award and some of the winners were amongst the nominated and winning athletes in the SportMalta Awards Għażliet Sportivi Nazzjonali.

Together Gaming Solutions extended their collaboration for the TGS Malta Fair Play Award which is awarded quarterly to those athletes or teams that excel in Fair Play during local sporting events.

The MSJA also held a  meeting with the Malta Football Association but unfortunately had to cancel the Traditional Boxing Day Football Tournament in aid of Istrina for the second consecutive time due to COVID-19.

Administrator Stephen Azzopardi participated in the webinar Chase The Action hosted by SportMalta together with Special Olympics, Malta Paralympic Comittee and Commission for the Rights of Persons with Disability.

President Sandro Micallef and Lorraine Cunningham were present for the opening of the GSSE 2023 in Malta and met Minister responsible for Education, Sport, Youths, Research and Innovation Hon. Clifton Grima.

Sandro Micallef addessed Junior College students during one of the sessions of the Basic Course in the Journalism Enrichment Programme.

The Executive Committee and other MSJA members also participated in a very interesting session hosted by the Malta Football Association and presented by National Head Coach Devis Mangia.

The 50th Anniversary Celebrations were organised after various postponments and a commemorative medal was presented to those sports journalists who served for 25 years and even more.

On 23rd April MSJA together with SportMalta organized the SportMalta Awards Għażliet Sportivi Nazzjonali with the return of the audience during a live transmission.

Those present at the AGM had the good news that MSJA has been given a property in Valletta to be used for the much awaited first ever sports museum in Malta. In the coming days there will be the hand over prior to the constructional works required.

It was definitely an exciting year which saw a record of paid members amounting to 94 where 22 of these members applied for the AIPS card given from AIPS, the international sports journalists association. 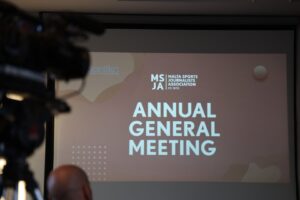 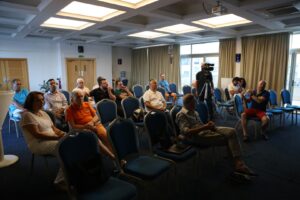 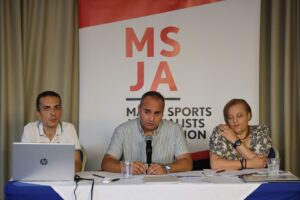 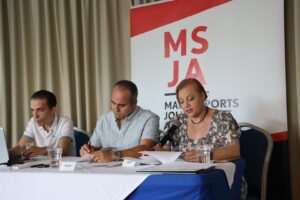