Tenishia Thornton has been awarded the Atlas Youth Athlete of the Month Award for the month of June.

Tenishia Thornton, at the age of 16, bagged an astonishing three gold medals and the title of world youth champion at the World Youth Championships held in Leon, Mexico.

Competing in the women’s 55kg class, the young Maltese lifter stunned the field with a successful 78kg lift snatch, a successful 100kg lift in the clean and jerk, and a total of 178kg to set a new Commonwealth and national record.

Tenishia Thornton was accompanied by her coach, Jesmond Caruana, who is also the President of the Malta Weightlifting Association (MWA).

The trophy for the June 2022 Atlas Youth Athlete of the Month, together with the sports apparel voucher, were presented to Tenishia Thornton by Matthew von Brockdorff, Managing Director and CEO of Atlas Insurance. The Malta Sports Journalists Association was represented by President Sandro Micallef and Administrator Stephen Azzopardi. 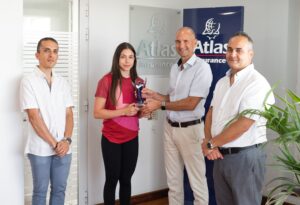