The Malta Fair Play Movement’ has announced the sixth TGS Malta Fair Play Award, in collaboration with Malta Sports Journalists Association and Together Gaming Solutions. The adjudicating panel is formed by Charles Camenzuli, Adele Muscat, Pierre Cassar, Kevin Joseph Azzopardi and Sandro Micallef. This award is aimed at sporting individuals or teams who would have distinguished themselves with an altruistic gesture of fair play during official and/or non-official competitions.

The second award for this year 2022, covering the April–June period, was given to Special Olympics Malta. The Maltese contingent, formed by over 400 athletes in six different disciplines, participated in the Special Olympics Invitational Games held in Malta, with an impressive tally of 65 gold, 60 silver and 67 bronze medals. Apart from the athletes’ commitment, a very friendly and fair play atmosphere was evident for their inclusivity, with all the other athletes coming from 23 different countries, during all the competitive games.

‘It is a sincere honour for us to present this accolade to the Special Olympics Malta which surely comes across as a miniscule token compared to the significant dedication, endeavours and determination put in by all those involved in leading this project that instils ample joy, courage and self-belief through sports participation in so many individuals. A big well done to all the athletes who have made Malta so proud of them through their participation and achievements.’ said Edward Licari, Director of Together Gaming Solutions.

The presentation of the TGS Malta Fair Play Award was hosted by Andrea Critien from the Finance & HR Department and Edward Licari, Director of Together Gaming Solutions, at their offices in St. Julian’s. Charles Camenzuli was present on behalf of the Malta Fair Play Movement. 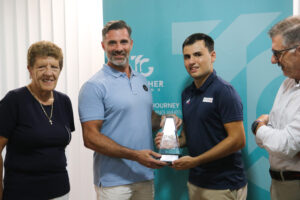