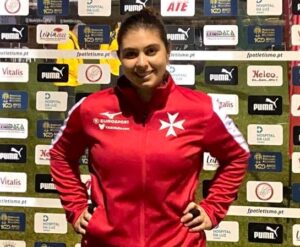 Mireya Cassar has been awarded the Atlas Youth Athlete of the Month Award for the month of April.

At the age of 19, thrower Mireya Cassar broke the hammer throw national record three times in the same competition and went beyond the significant 50 metre milestone, with an impressive 52.50 m throw. Cassar was competing at the second Challenge Meeting hosted by Athletics Malta at the Matthew Micallef St John Stadium in Marsa.

This result meant that Cassar broke the national record for four times in the four competitions she has taken part in, three of which took place abroad. In total, she improved her record by almost five metres. The five-star performance in Marsa for Cassar was completed with another record, this time in the shot put in the Under 20 category.

This result augurs well for the continuous development of this emerging talent. Cassar is expected to be one of the athletes representing Malta in the Athletics Championships for Small States of Europe that will be held in Malta in June this year.

Mireya Cassar, is currently undergoing professional training in Germany, therefore, the official presentation of the Atlas Youth of the Month trophy and the sports apparel voucher that goes along with this award will be held later.

This award is a joint initiative of the Malta Sports Journalists Association and Atlas Insurance. The adjudicating panel of this award takes note of all the youths’ achievements during the month under review and at the same time invites local sports associations and federations to send in their nominations for consideration if they feel that any of their under-21 athletes have distinguished themselves during that month.