Jeremy Zammit has been awarded the Atlas Youth Athlete of the Month Award for the month of January. Zammit is familiar with this award after winning it in April and July of last year.

The Maltese athletics season got off to a flying start with a memorable day, especially for Jeremy Zammit (Pembroke Athleta) who, at just 17 years of age, broke the long-standing senior national record in long jump, with a 7.73m jump. The previous record, which stood at two cm less, was held by Rachid Chouhal, who interestingly also produced his own record on the same day, setting a new category landmark at 6.34m among the male over 45.

Zammit is no stranger to this award, having already won it in April and July last year for breaking domestic records and putting in impressive performances in the EAP International Meeting and the European U-20 Championships, which also saw him being a runner-up for Atlas the Youth Athlete of the Year 2021 award.

The trophy for the January 2022 Atlas Youth Athlete of the Month together with the sports apparel voucher were presented to Jeremy Zammit by Matthew von Brockdorff, Managing Director & CEO, and Robert Micallef, Chief Commercial Officer, of Atlas Insurance. The Malta Sports Journalists Association was represented by Administrator Stephen Azzopardi for this presentation. 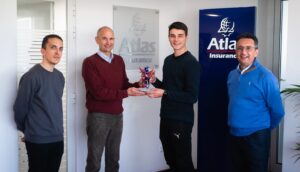