Malta had to contend with tough competition, including Russia, Spain, the Netherlands, Great Britain, Norway and Italy. Despite coming up against more experienced athletes, as a solo, Zea Montfort went through the final and ranked 7th in the Comen ranking. In the combined rankings (Europeans and Comen) she came 14th out of 20.

The trophy for the September 2021 Atlas Youth Athlete of the Month together with the sports apparel voucher were presented to Zea Montfort by Matthew von Brockdorff, Managing Director and Chief Executive Officer of Atlas Insurance. The MSJA was represented by Administrator Stephen Azzopardi for this presentation. 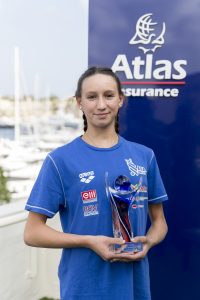 Nominations for this award may be sent via email to info@maltasportsjournalists.com.