Pembroke Athleta’s up-and-coming track and field athlete Jeremy Zammit has been awarded the Atlas Youth Athlete of the month Award for July. Zammit has already won April’s Award after securing the U-18 category gold medal at the third edition of the EAP International meeting which was held in Catania. ​

In July, Jeremy Zammit continued to rewrite the history books at the European U-20 Championships in Tallinn when the young athlete placed fifth in the long jump final.

Zammit, who had set a new national record with a leap of 7.58 metres, further improved on his best by posting a leap of 7.62 metres.

His effort was also the second-best jump in the world in the U-18 category, just three centimetres away from the world-leading jump of 7.65 metres.

The trophy for the July 2021 Atlas Youth Athlete of the Month together with the sports apparel voucher were presented to Jeremy Zammit by Matthew von Brockdorff, Managing Director and Chief Executive Officer of Atlas Insurance. The MSJA was represented by President Sandro Micallef, General Secretary Lorraine Cunningham and Administrator Stephen Azzopardi for this presentation. 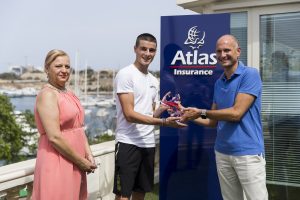