Pembroke Athleta’s up and coming track and field athlete Jeremy Zammit has been awarded the Atlas Youth Athlete of the month Award for April. Zammit secured the U18 category gold medal at the 3rd edition of the EAP International meeting which was held in Catania last month. ​

It was a remarkable experience for Jeremy Zammit whose 7.14m jump secured him not only the gold medal in the long jump event but also a Maltese age category record (U18) and subsequently placing him among the best ten leading jumps globally for his age group this year.

The trophy for the April 2021 Atlas Youth Athlete of the Month together with the sports apparel voucher combined with this award were presented to Jeremy Zammit by Matthew von Brockdorff Managing Director and Chief Executive Officer of Atlas Insurance. The MSJA was represented by Executive member Stephen Azzopardi for this presentation.

This award is a joint initiative of the Malta Sports Journalists Association and Atlas Insurance. The adjudicating panel of this award takes note of all the youths’ achievements of the month under review and at the same time it invites local sport associations and federations to send in their nominations for consideration if they feel that any of their under-21 athletes have distinguished themselves during that particular month. 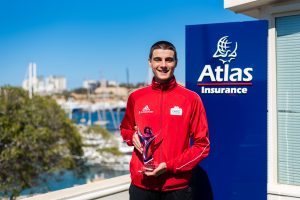