15-year old weightlifter Tenishia Thornton has been named as the first winner of the Atlas Youth Athlete of the Year. She won this prestigious award after a combined vote by a panel of three sports journalists and a public vote which was held online over the past weeks. Thornton was the only athlete in 2020 who managed to scoop two awards in March and November respectively.

Upcoming football star Haley Bugeja was the overall runner up, followed by gymnast Tara Vella Clark to complete an all female podium.

The presentation to Tenishia Thornton was made by Matthew Von Brockdorff CEO of Atlas Insurance. Malta Sports Journalists Association officials Sandro Micallef and Lorraine Cunningham were also present for the presentation.

In the meantime Atlas Insurance has confirmed that it has renewed the collaboration with the Malta Sports Journalists Association for another year in relation to this initiative aimed at promoting young Maltese athletes.

The aim of this award is to promote and recognize the achievements both in terms of sporting results in Malta or in the international scenario, as well as adherence to the sporting values. The terms for 2021 will remain unchanged where athletes up to the age of 21 who would have distinguished themselves in their respective sports discipline will be shortlisted for the monthly award by a panel of sports journalists. Each winner will again receive the prestigious trophy together with a sports apparel voucher of their choice, courtesy of Atlas Insurance.

Those athletes, officials and coaches who would like to submit a nomination are invited to send in their motivation by email on info@maltasportsjournalists.com. 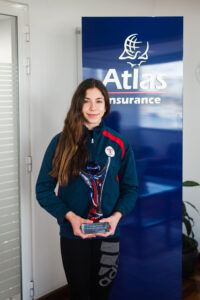