Young Tenpin bowler Kayden Lagana has been named as the winner of the September 2020 Atlas Youth Athlete of the month award. During the period of evaluation Lagana registered impressive results at the MTBA National League (4 men team) as well as the Doubles’ League.

Kayden Lagana’s first tangible achievement was when he became the youngest Maltese player to bowl in the highest division of the MTBA National League.

A 600+ series is an aim for all Tenpin bowlers and such a score was registered by Lagana when he managed to bowl an amazing 6 series over the 600.   His greatest achievement was when he rolled a 680 in the Doubles League, exceeding his personal best which he had bowled in August by 1 pin, and therefore placing himself in the Youth records up to 18 years for series over 675.   Kayden Lagana has in fact become the youngest ever Maltese Tenpin bowler to roll a 675+ series at 12 years and 10 months of age.

Following this success Lagana kept his momentum and went on to score a 637 series placing him as the highest Tenpin bowler of Division 1 for that week, surpassing the more renowned local bowlers like Mauro Anastasi, Mark Spiteri, Matthew Magro, amongst others.

This was the ninth award being awarded to a local youth athlete in the series of this joint initiative by Atlas Insurance and the Malta Sports Journalists Association to recognize the efforts by young sports athletes and thus encouraging them to continue to train harder in their respective sports disciplines. 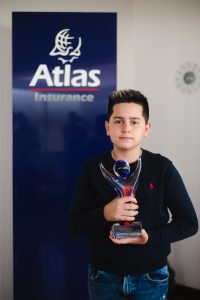 The trophy for the September 2020 Atlas Youth Athlete of the month and the sports apparel voucher combined with this award were presented to Kayden Lagana by Matthew von Brockdorff Chief Executive Officer at Atlas Insurance. Sandro Micallef and Lorraine Cunnigham President and General Secretary respectively of the Malta Sports Journalists Association were also in attendance.