Young female weightlifter Tenishia Thornton has been declared as the Atlas Youth Athlete of the Month for March. Thornton, who is still to turn 15, had a very remarkable start to 2020 where she distinguished herself through ongoing age group and national records within the Malta Weightlifting Federation.

This is the third award being awarded to a local youth athlete since the launch of this Award which is a joint initiative by Atlas Insurance and the Malta Sports Journalists Association. Thornton follows the January 2020 award winner sprinter Rachela Pace and the February 2020 winner Pool player Dejan Grech.

Tenishia Thornton had been a runner up in both the January and the February contest of this award which is being announced every month by a panel formed of three sports journalists, all members of the Malta Sports Journalists Association.

Despite the ongoing COVID-19 pandemic, MSJA informs the public that the Atlas Youth Athlete of the Month Award will continue to be awarded. Both the MSJA and Atlas Insurance are cognisant of the fact that, over the past weeks and for the coming months, all sporting events and activities in Malta and abroad have been cancelled or postponed. Therefore the award cannot be given on the basis of purely sporting achievements.

However, as per the media release issued to launch this initiative back in January 2020, the Atlas Youth Athlete of the Month award is intended also to promote physical activity and competitive sports among the younger generations, as well as to generate positive role models for our young people in general.

In this regard, over the coming months, the adjudicating panel of the MSJA will be reviewing the activities of young athletes especially those who are giving a positive contribution to the communities they live in, and to Maltese society in general, through the promotion of sports via online activities aimed at promoting wellbeing, as well as good deeds and voluntary work aimed at helping other athletes as well as people in need.

Both the MSJA and Atlas believe that this is a great opportunity to reward the positive stories of young athletes who are promoting physical and mental wellbeing, as well as contributing to society’s welfare in such challenging and unprecedented times.

Athletes under the age of 21, as well as their respective associations and federations who would like to submit their nomination can do so by sending an email on info@maltasportsjournalists.com

Meanwhile, the  winner of the March award – Maltese weightlifter Tenishia Thornton – recently registered impressive lifts in the Malta International Weightlifting Open where she managed a 55kg snatch and a 70kg clean & jerk for a total lift of 125kg in the 45kg category. During this competition she had the opportunity to lift along more experienced athletes hailing from all parts of the World who were in Malta trying to increase their seasonal points since the Tournament was sanctioned by the IWF as an Olympic qualifier for the then Tokyo 2020 Olympics.

Thornton’s fine display at the Malta International Open with another National record lift of 125kg came to no surpise. In fact in December in a build up event for this Tournament she had registered a 124kg lift at the 2019 Under 15 European Championships in Eilat, Israel were she also broke several category records. These results also led her to make it as a finalist in the Female Youth Category of the SportMalta Awards Għażliet Sportivi Nazzjonali which were held last February.

The trophy for the March 2020 Atlas Youth Athlete of the month together with the sports apparel voucher combined with this award was presented to Tenisha Thornton by Lorraine Cunningham, General Secretary of the Malta Sports Journalists Association. Thornton’s coach and MWF President Jesmond Caruana was also in attendance. 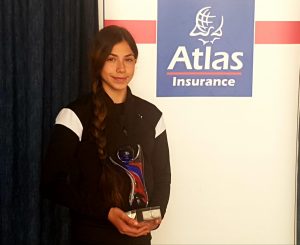