Sprinter and long jumper Rachela Pace has officially been named the very first winner of the Atlas Youth Athlete Award, for the month of January 2020.

Launched a few weeks ago, this award is a joint initiative between Atlas Insurance and the Malta Sports Journalists Association (MSJA) whereby a jury composed of three sports journalists evaluate each month the results obtained by youth athletes under the age of 21.

The aims of this monthly award are varied. First and foremost, the award is intended for those athletes up to the age of 21 who have distinguished themselves in sports achievements both in terms of sporting results in Malta or abroad, as well as adherence to the sporting values.

Sports disciplines associated with this award can be varied, and all sports – both individual and team-based will be considered for this award.

“The Atlas Youth Athlete of the Month award is intended to promote physical activity and competitive sports among the younger generations and generate positive role models for our young people in general,” said David Cassar, Manager – Business Development and Marketing at Atlas Insurance.

Rachela Pace, who is 16 years old distinguished herself during the month of January as she competed in two top international events, namely the London Indoor Games 2020 and in the EAP Amsterdam Meeting 2020, during which she registered several personal bests and a fourth place finish in Amsterdam in the long jump event with an impressive 5.64 metre distance.

In the prestigious Lee Valley track in the UK at the London Indoor Games, Pace competed in the 60 metre, 200 metre sprints and in the long jump competition.

She set a personal best of 8.06 seconds in the 60 metre race improving her previous time (indoor) by 0.15 seconds. Another personal best was registered in the 200 metre sprint where Pace clocked 26.37 seconds decreasing her previous personal best by 0.62 seconds. Her last event in London was the long jump where she managed a jump of 5.11 metres ending in a respectful fifth place overall.

Few days later at the 2020 EAP Amsterdam Meet in the Netherlands, Pace managed to set a new indoor personal best in the long jump event in which she jumped the distance of 5.64 metres, improving her previous distance of 5.45 metres and finishing fourth overall.

In January the Malta Amateur Athletics Association shortlisted her for the U/18 Special Achievement Award for last season’s achievements.

The Award to Rachela Pace was presented by David Cassar, Manager – Business Development and Marketing at Atlas Insurance. Sandro Micallef and Lorraine Cunningham President and General Secretary respectively of the MSJA attended also the presentation. 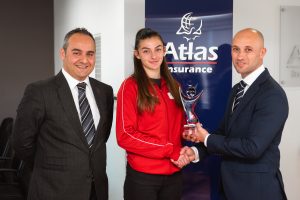