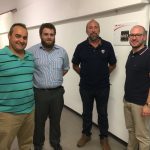 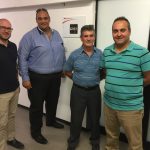 The Executive committee of the Malta Sports Journalists Association continued meeting more associations with the aim of strengthening the relation between the sports media and the administrators of local sports federations and associations.

The Malta Triathlon Federation was represented by its President Cyprian Dalli and the Vice President Oswald Spiteri, whilst in a separate meeting the MRFU was represented by President Steve Busuttil and George Zammit Montebello who is the person responsible for public relations of the Malta Rugby Football Union.

These meetings are being on the initiative of the newly appointed MSJA President Sandro Micallef as part of an ongoing programme to build a stronger and excellent relationship between the Malta Sports Journalists Association and the various national sports associations. These meetings also help broaden the spectrum of communication with different administrators from the various sports disciplines.