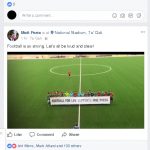 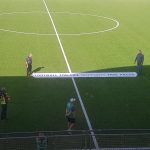 The Committee of the Malta Sports Journalists Association disassociates itself from the ‘Stunt’ of propaganda that MFA tried to perpetrate by providing a steamer before the BOV Premier matches during the weekend with a statement of: ‘Football for Life Supports Free Press’ (as seen in the photo).

The committee reacted to this banner using two different phrases addressed to the Malta football Association:

‘Practice what you preach’ and ‘Charity begins at home’

Whilst the committee of the Malta Sports Journalists Association joins with the IGM and also the civil society to condemn the act that resulted to the assassination of journalist Daphne Caruana Galizia, the general public and the sports public need to understand that till now eventhough MFA has been speaking in favour of Free Press yet the local sport media are still not accepted with the rest of the club delegates in order to report the MFA council. This was a decision taken early on this year. One must not forget the number of attempts that high officials presenting MFA did to shut the mouth of a number of sports journalists that often criticize controversial decisions.

The Malta Sports Journalists Association condemns this type of behaviour that MFA is presenting using the story of the assassination of journalist Daphne Caruana Galizia in order to get the public’s attention thus develop an alternative alienation. Daphne Caruana Galiza was not a sports journalist and/or a local football reporter. Therefore this case should have never been involved with football and/or sports and MFA should have never used such a story for its glory.