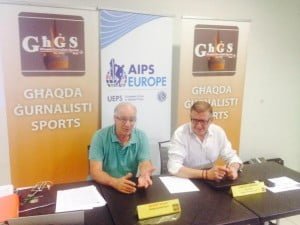 The Malta Sports Journalists Association has organised with success its Annual General Meeting for the year 2014/15. The meeting was summoned for Wednesday 15th July 2015 and was held at the San Benedettu Sports Complex in Kirkop.

The meeting was well attended and proved to be very useful for the MSJA members.

General Secretary Sandro Micallef read out the minutes of the previous AGM after the traditional address of President Charles Camenzuli. Micallef then went on to deliver the annual administration report for the year under review.

MSJA member Stewart Said gave a presentation following his successful participation during the AIPS Young Reporters Programme which he attended in Baku, Azerbaijan.

The Annual General Meeting approved a fundamental amendment in the association’s statute about the proper distinction between active members and associated members namely individuals who pay the MSJA membership that happen to be active members in other sports associations.

The Sports Journalists who were going on the Florence Tour for the Italy v Malta game were also in attendance and were given the latest information about the organised tour.

The meeting was also attended by two special guests who were registered as observers namely Charles Flores and Tony Barbaro Sant who were representing the Institute of Maltese Journalists.