Courtesy by The Times 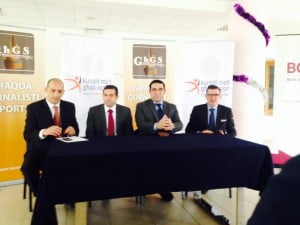 Thirty-two sports associations have nominated candidates for the 2014 Sport Malta Awards Għażliet Sportivi Nazzjonali, to be jointly organised by the Kunsill Malti għall-iSport (KMS) and the Għaqda Ġurnalisti Sport (GħĠS).

The two bodies have come to an agreement to unify the two awards, reviving a partnership that was temporarily interrupted last year when the sports journalists’ association hosted the Għażliet Sportivi Nazzjonali event on their own while the KMS put on a separate show under the name of Ġieh l-Isport Malti.

News that the KMS, with the backing of Chris Agius, the Parlia-mentary Secretary for Youth and Sport, and the GħĠS have renewed their co-operation agreement for the next three years is likely to be greeted with widespread approval.

Critics, administrators and sports enthusiasts have long contended that it didn’t make much sense for a small country like ours to have so many annual sports awards, also in light of the fact that the Maltese Olympic Committee (MOC) hold a separate event to recognise the achievements of athletes and sports officials.

An organising committee, made up of officials from KMS, GħĠS and the Parliamentary Secretariat for Sport, has been set up to oversee the voting process and logistical aspect of the Sport Malta Awards Għażliet Sportivi Nazzjonali which will reach its climax on January 31 when the winners in the various categories will be announced.

Mark Cutajar, chairman of the organising committee, expressed his satisfaction at the signing of a new agreement between KMS and GħĠS.

“The general perception was that there are too many sports awards in our country,” Cutajar told a news conference at the Cottonera Sports Complex yesterday.

“While we recognise that the awards handed out by the MOC are different, those organised by KMS and GħĠS are very similar.”

Cutajar said the organisers of the Sport Malta Awards Għażliet Sportivi Nazzjonali are guided by two key principles, namely to honour the feats of Malta’s outstanding athletes and officials while ensuring transparency throughout the voting process.

In addition to the popular cate-gories – sportsman, sportswoman, official, coach, youth (male and female) and team of the year – awards will be presented to Special Olympics athletes, Gozo athlete of the year and the association deemed to have staged the best sporting event of the year.

After the organising committee select the 10 semi-finalists in the leading categories, the onus will be on the members of the GħĠS to come up with the final five-strong shortlist.

A panel consisting of repre-sentatives of all local media houses will then cast their votes during the final night which will be screened live on TVM2.

The organisers have also retained the People’s Choice Award. The participating associations have already received the ballot documents to nominate the top five athletes of 2014 but they can’t vote for their nominees.

Their collective vote amounts to 50 per cent of the final outcome while the public vote will account for the remaining half.

The shortlisted candidates will be announced on January 10 when the venue of the presentation night will also be revealed.

During the same activity, certificates will be presented to all semi-finalists.

Of all the local sports associations affiliated with the KMS, 32 have not submitted their nominations for the awards but Cutajar explained that this number includes several tiny associations that are either dormant or do not organise events on a regular basis.

“The leading sports associations have all responded to our call to nominate their members for these awards,” Cutajar said.

Asked whether the organising committee were looking to invite a renowned sports personality for the prize-giving ceremony, Cutajar didn’t rule it out but insisted that they were not prepared to devote extra funds to lure a foreign guest.

Charles Camenzuli, the president of the GħĠS, welcomed the signing of the new three-year co-operation deal with the KMS.

“Over the past few months, we have increasingly felt that it would be appropriate to pool our resources in order to honour Maltese sports in the most fitting manner,” Camenzuli said.

“This agreement enables us to plan for the next three years.”

For his part, Parliamentary Secretary Agius said that, even during his time as Opposition spokesman for sport, he always stressed that resources were being wasted due to the country’s trend of “repeating or even tripling an event” that had the same theme.

“One of the first meetings I had after being appointed Parlia-mentary Secretary for Sport was with the GħĠS,” Agius said.

“It was during this meeting that the idea of co-hosting the annual awards contest was first discussed.

“I believe that, when it comes to sport, we need to put politics and rivalries aside and unite behind our sports exponents.”

“The message is clear and un-equivocal,” Busuttil said.

“There is antagonism and com-petition on the sporting field but thanks to this initiative, the KMS together with GħĠS are organising a unified sports awards event that makes sense.”