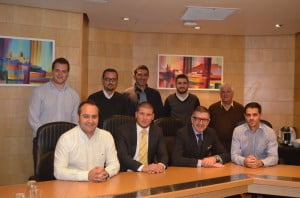 The Executive Committee of the Malta Sports Journalists Association held a meeting with the main officials of the MFPA – Malta Football Players Association. During the meeting several issues related to both associations were discussed.
The meeting was led by the Presidents of the two respective associations namely Mr Charles Camenzuli President of the Malta Sports Journalists Association and Dr Anthony Galea President of the Malta Football Players Association. The two associations agreed that in view of the recent ongoing debate on the players status reform as proposed by the MFA, both associations are to meet and keep contact on a regular basis.
The Players Status reform was in fact one of the subjects which was included in the meeting’s agenda.
Both associations agreed that a workshop aimed at football journalists / commentators is to be organised in which the MFPA will explain its role to the sports journalists which are considered to be one of the main stakeholders in the local football game.
By Sandro|2018-01-12T12:36:59+02:00December 6th, 2014|Carousel News, Home Page, News|0 Comments

About the Author: Sandro