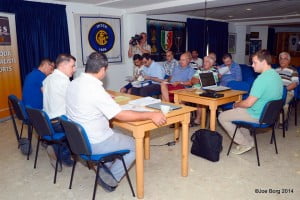 The Executive Committee of the Malta Sports Journalists Association has held its Annual General Meeting on Sunday 20th July 2014 with the main theme being ‘Together, for one goal’. The meeting was held at the Inter Club Malta, Santa Venera, which happened to be the third foreign based supporters club visited by the GhGS in the past two years, following those of Juventus Vero Amore and Manchester United SC.
During the AGM, the administrative report and financial report were read out and unanimously approved. The members present also accepted and approved three recommendations made by the association’s auditors related to the period in review of the financial books of the association (1st July – 30th June), the period of validation of the membership cards (1st July – 30th June), and also an established period (1st July – 31st July of each year) when the AGM has to be held.
The detailed administrative report, was presented in an innovative way, as the Secretary General Sandro Micallef and the Public Relations Officer Nigel Mifsud presented the work done by the association in the form of a video which was more interactive. The video was also uploaded on the Official youtube channel of the association and can be viewed on the following link : https://www.youtube.com/watch?v=7MDLoabtgVo&feature=youtu.be
The Financial rpeort presented by the treasurer Antoine Dalli, which was previously vetted and discussed along with the association’s auditors Silvio Vella and David Galea (who are also members of the association), presented a detailed analysis of the association’s expenditure and income throughout the past months.
During his speech, GhGS President Charles Camenzuli reiterated the work done by the executive committee, stating that the work done throughout the past year since the executive committee was elected was exhaustive and thanked all members for their contribution. Mr Camenzuli ended his speech by sending a message to all Sports Journalists to unite within the association which is working for the best interests of Sports Journalism in Malta.