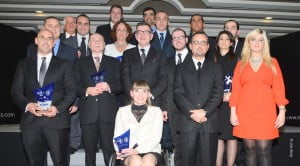 The ceremony, at the Le Meridien Hotel, was attended by several distinguished guests, among them Dr Stefan Buontempo, Parliamentary Secretary responsible for Sport, as well as David Agius MP, representing the PN.

Also present for the occasion as a special guest was former Italian boxer Patrizio Oliva. He had won the gold medal at the Moscow Olympics in 1980. He congratulated all the winners before, together with GHGS president Charles Camenzuli and Maltco Lotteries CEO, Dr Katakis, presented the prestigious Sportsman of the Year trophy to William Chetcuti.

It is the 10th time that Chetcuti has won the honour while for Sue Abela, it is the fourth time she has been voted top sportswoman.

It is to be mentioned that Chetcuti won the first ever gold medal for Malta at the Mediterranean Games after winning the Double Trap shooting competition. He also placed fifth in two World Cup competitions in Cyprus and Peru, apart from finishing the year as the world’s No. 7.

Chetcuti was a runaway winner. He obtained 231 votes, 57 more than second placed Daniel Zahra (kickboxing) who obtained 174. Third was boxer Billy Corito with 165, fourth Steve Camilleri (waterpolo) with 155 and fifth Andre Schembri with 145.

The Sportswoman’s contest was one of the closest – if not the closest – ever in the 53 year history of the event. In fact, Abela won by just one vote more than second placed rifle shooter Eleonor Bezzina. Abela obtained 206 votes while Bezzina got 205.

Third in the contest was athlete/weightlifter Nicole Gatt who got 158 votes, fourth Rebecca Camilleri (athletics) with 154 and fifth footballer Ylenia Carabott with 147.

There were six persons contesting the Official of the Year contest.

Waterpolo won a second top honour in the Team of the Year contest. The national seniors team was voted at the top of the list with 214 votes, 24 more than the second placed national men’s Pool team. Third was the national women’s football team with 172, fourth the Bocci (raffa) team with 149 and fifth the tenpin bowling national team with 145.