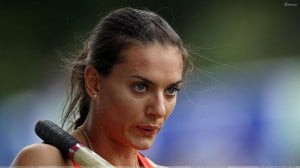 MALTA , December 31, 2013 – For the first time in his career, MO FARAH – one of the leading figures in the athletics world and for the third time in her carreer Russian pole vaulter YELENA ISINBAYEVA are the winners in the 2013 Edition of the European Sportsman and Sportswoman of the Year Awards .

It was the 31st annual poll conducted by the AIPS – EUROPE as the biggest continental section of AIPS and was established in 1977 at the AIPS Congress in Milano Marittima.

Since 2003, the annual poll was named the Frank Taylor Trophy in honour of the former president of both AIPS and UEPS.

MO FARAH, runner up in last year’s edition got a total of 58 votes ahead of Rafael Nadal (tennis) with 49 votes, Formula1 champion Sebastian Vettel with 44 votes and France football player Franck Ribery with 42 votes

The women’s award for the Evgen Bergant Trophy was won for the third time by Russian athlete YELENA ISINBAYEVA with 56 votes ahead of Slovenian Tina Maze with 49 votes followed by Russian swimmer Julia Efimova with 41 votes and Ruta Meilutyte of Lithuania with 36 votes. Isinbayeva won this title already in 2005 and 2008

EUROPEAN SPORTSMEN and SPORTSWOMEN of the YEAR