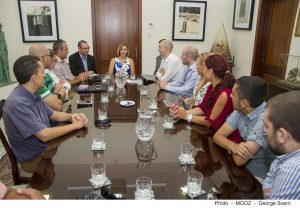 In a meeting that was held in the minister of Gozo, the minister for Gozo Hon Justyne Caruana met the new executive Committee of the Malta Sports Journalists Association that was recently elected.

Amongst various themes discussed during the visit included the focus of Gozo being promoted as the Sport touristic best destination both for the local and international associations. The Minister Caruana emphasized the importance of dedication and hard work of the Minister in order to advertise and help in the promotion of Gozo on an international spectrum to support and help this ‘niche’ (the island of Gozo) bring out the full potential of it to keep expanding.

The minister Justyne Caruana added the importance of a wide discussion with all stakeholders concerned for the island of Gozo to attract Sports tourism. Caruana continued that the emphasis shouldn’t be on one particular Sport but on a number of disciplines, this is due to the high potential of Gozo. Hon Caruana also mentioned that the government is planning to strengthen the Sports facilities in Gozo. The minister for Gozo mentioned for example that Gozo was the place that was recently used for the organization of a finish of a very renowned race in the Sport of Sailing and the ‘trophee Baillie du Suffren’. She continued that this means that Gozo has a high potential to attire such events and that the Malta Sports Journalists Association can also contribute to this.

The general secretary of the Malta Sports Journalists Association Mark Mizzi remarked that Gozo offers a lot of advantages if one considers that it is equipped with good sporting facilities (eventhough some of which need to be refurbished), the weather is good and also the fact that you do not need to travel long hours in order to reach to your final destination .

The minister for Gozo added that both the Minister and the Malta Sports Journalists Association have shared the same ideas mainly the Sport vision for Gozo Sports Tourism. Caruana concluded by mentioning the importance of maximum contribution from all the members concerned whilst together ‘we can bring and attire more activity and Sport events in the island of Gozo’ with the possibility of conferences which can also be planned in the future.