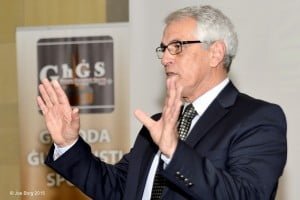 The theme ‘ Say NO to match-fixing’ was the main topic in the educational Seminar organized by the Malta Sports Journalists’ Association for its member journalists. The Seminar was conducated by  Franz Tabone who has been involved in football, as a player or administrator, for 50 years and since 2011 as  Integrity Officer for the Malta Football Association  .

Mr.Tabone tacked the various aspects relative to the theme in question. Further, through his knowledge and experience in the field discussed how even the sport media has a role to increase awareness about this plight. MSJA members had also the opportunity to express their views on the matter.

The Seminar was addressed by MSJA President Charles Camenzuli who stressed on the role of the sport media to ‘ Say NO to match-fixing’ and how even through the social media, sports journalists have an important task in order to educate the general public on the matter which directly and indirectly is becoming an uphill fight.

Mr.Camenzuli on behalf of MSJA, as AIPS Europe Secretary General presented Mr.Tabone with the AIPS 90th Anniversary book which covers the ninety year history of the International Sport Media Association.