Home/AIPS 78th Congress kicks off in Paris
Previous Next 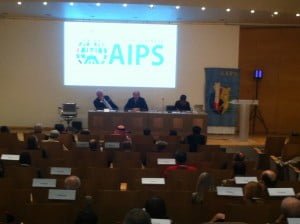 Just meters away from the Grand Auditorium of the Louvre, where the opening of the AIPS Congress in Paris was set to begin in a few hours, the Executive Committee of AIPS met to cover the association’s most crucial issues.

Milestone congress AIPS President Gianni Merlo spoke with pride about how the Congress was organized in such short notice, and on such a high level. “After the unfortunate situation in which Montevideo and the Sports Journalists Association of Uruguay had to pull out of hosting the congress, we managed to do something incredible in less than two months, in Paris no less, the city where our association was born. This is also a special congress because it is independent, without the financial support of the local government. With its success we will show the world that we are capable of such a thing, it will be a test for the electoral Congress in 2017 which we planning in the city of our headquarters – Lausanne.”

Sport Media Pearl Awards The Executive Committee discussed the collaboration between AIPS and Abu Dhabi Media on the Sport Media Pearl Awards that were to be announced that evening. It was agreed that the success of the awards depended on the active collaboration and communication between the national journalist associations. As the members underlined, AIPS was chosen to head these awards because of the association’s globality, network potential and dedication to safeguarding the rights and freedom of journalists. AIPS President Gianni Merlo and Interim Secretary Evelyn Watta insisted that it was AIPS’ duty to continue on this same path.

Free journalism Building on this crucial aspect, the Executive Committee moved on to discuss AIPS Europe’s petition to the EU regarding television and radio rights and the free flow of information. This topic will also be covered on the last day of the congress, as a reminder to all how important the freedom of journalists truly is, and how the threat of influencing sports coverage can only be fought against if it is acknowledged and brought to the highest authorities. “We must remind our colleagues and sports federations and organizers what it means to be free in order to save both sports and our principles,” concluded Gianni Merlo.

In the meantime a new milestone in the world of sport journalism was set Monday at the Louvre Museum in Paris with the launch of the Sport Media Pearl Awards, managed by the International Sports Press Association (AIPS) and hosted by Abu Dhabi Media (ADM).

The awards stand to recognise the work of everyone behind the scenes, the sport industry’s ‘hidden soldiers’; shedding light on what they have been doing to keeping sports the international language spoken by all. Abu Dhabi Media is no stranger to focusing on sports through its diverse platforms making it one of the fastest growing multi-platform media and entertainment organizations in the Middle East.

Commenting on the announcement, H.E. Mohammed Ebraheem Al Mahmood, Chairman and Managing Director of Abu Dhabi Media said: “Abu Dhabi Media is pleased to host the Sport Media Pearl Awards. The partnership with AIPS comes in recognition for the important role sport journalism plays across the globe. As a leading media organisation, we see it as our duty to acknowledge and support those who deliver exceptional reporting to the public, and foster an inspirational dialogue.”

“The awards represent a new platform for the celebration and development of sport media excellence among key industry practitioners and enthusiasts across the globe,” he added.

The announcement, which coincided with the official opening of the 78th AIPS Congress, establishes the most significant international media accolade for achievement in sport storytelling.

AIPS President Gianni Merlo said: “These Awards are very important, because in a difficult moment for our profession it is necessary to return the spotlight onto the value of our work. Sport means culture and these awards will help the public recognise the social value of sport journalism.

“It is especially significant for our association that the awards were announced in Paris, the birthplace of AIPS the peak body representing the international sports media, founded 90 years ago at the 1924 Paris Olympic Games.

“We thank Abu Dhabi Media for hosting this initiative, which will add something new to our world.”

More than 300 delegates from 101 nations are attending the 78th AIPS Congress.

Also in attendance at today’s announcement was French Secretary of State for Sport, Mr Thierry Braillard.

Malta was being represented at this Congress by Malta Sports Journalists Association officials Charles Camenzuli and Sandro Micallef President and General Secretary respectively.